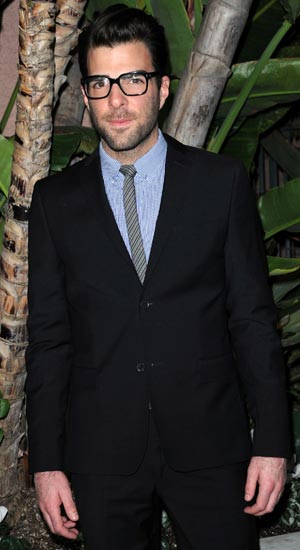 Bio:Zachary Quinto (born Zachary John Quinto in Pittsburgh, Pennsylvania on June 2, 1977), is an American actor and producer. He broke into the business guest-starring on a number of television series, before recurring as a computer expert on the Fox hit, 24. His first starring role was as Gabriel “Sylar” Gray on NBC’s sci-fi favorite, Heroes. Zachary then set his sights on the role of young Spock in J.J. Abrams’ 2009 Star Trek movie. Friends and fans started a campaign for him to win the role: Zach Quinto — Spock ’08. It worked, and Zachary took the role, with final confirmation from the original Spock — Leonard Nimoy. Zachary nonchalantly came out as gay in an interview with New York Magazine in October 2011. The piece didn’t mention his sexual orientation until halfway through the story.

Personal Life:Zachary publicly came out in October 2011. In September 2012, news broke that Quinto was romantically involved with Glee and Broadway star, Jonathan Groff.