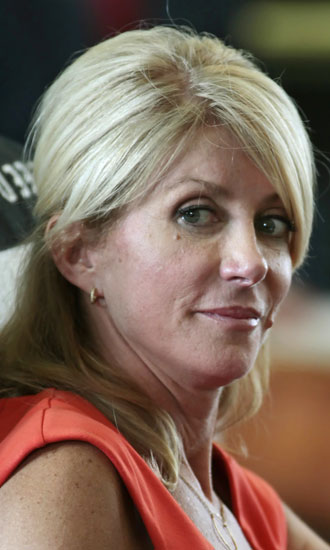 Bio:Wendy Davis (born Wendy Russell Davis on May 16, 1963 in West Warwick, Rhode Island) is an American Democratic politician. She represents District 10 of the Texas Senate, and is a candidate for Governor of Texas in the 2014 election. Wendy gained massive notoriety on June 25, 2013, when she held an 11-hour-long filibuster to block legislation that would have created new abortion regulations in Texas. Her efforts rendered the bill dead (though Governor Rick Perry went on to pass an amended form of the bill a month later) and started a grassroots movement for her gubernatorial run.

Best Known For:Wendy Davis is best known for holding an 11-hour-long filibuster in the Texas Senate to stop abortion legislation.

Personal Life:Wendy Davis was born in Rhode Island, but moved to Fort Worth, Tex. with her family at age 11. She became the first member of her family to graduate college, earning a Bachelor degree from Texas Christian University, and then a law degree from Harvard Law School in 1993. Wendy married her first husband at the age of 18, and had a daughter, Amber, in 1984. Wendy divorced from her first husband after a year. Wendy had her second daughter, Dru, with her second husband, Jeff Davis. The couple divorced in 2005.