Things got heated at the Grammys thanks to Tyler, the Creator. The rapper got the crowd on their feet with a killer performance featuring Boyz II Men.

Honestly, the Grammys wouldn’t have been the same withoutTyler, the Creator, 28. The rapper left fans shook with a spirited performance of his hit song, “EARFQUAKE,” during the 2020 Grammy Awards on Sunday, Jan. 26. Tyler came onto the stage with Boyz II Men and they all stood by a literal dumpster fire. The rapper then switched tunes and jumped into a commanding performance of “New Magic Wand,” featuring a ton of background dancers dressed like look-a-like Tylers in pink suits and blond bowl cut wigs.

The Odd Future co-founder’s performance was mind-blowing, featuring dynamic, jerky dance moves, burning paper homes, and a jump off the back of the stage. The crowd couldn’t get enough and fans blew up Twitter during the set, showing a massive amount of support for their favorite California rapper. One fan tweeted out, “Tyler the Creator just absolutely demolished at the Grammys. Love seeing Orville Peck in the crowd.” Another shared, “Tyler, The Creator is a fine art.” It’s safe to say that Tyler nailed this performance.

The “I THINK” emcee wasn’t at the annual eventjustto perform. Tyler’smassively successfulfifth studio albumIGOR, released on May 17, was nominated for one of the event’s most coveted awards, Best Rap Album. Tyler will go up against albums from rappers likeDreamvilleforRevenge of the Dreamers III,Meek Mill’sChampionships,21 SavageforI Am > I Was, andYBN Cordae’sThe Lost Boy. This definitely will be one of the most intense categories of the evening! 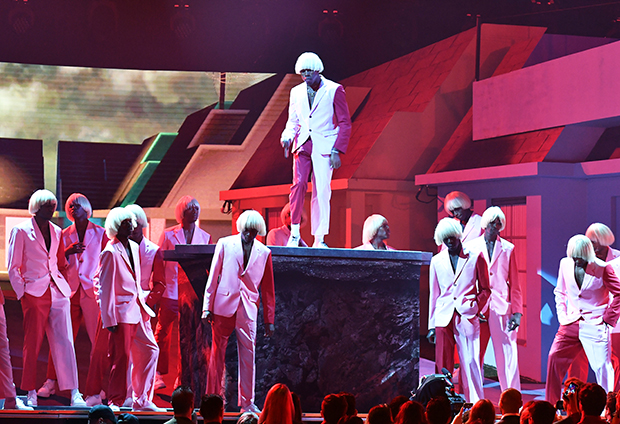 The album comes two years after the release of Tyler’s last album,Flower Boy,which was also up for a Grammy but lost toDamnbyKendrick Lamar.The project is made up of 12 incredible tracks, featuring notable artists likeKanye West,Frank Ocean, andPharrell Williams. 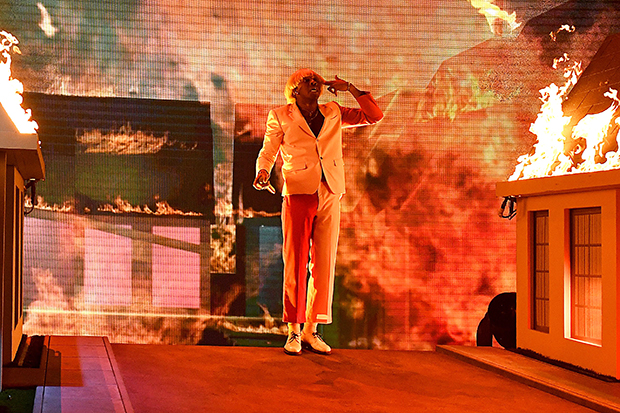 Other stars on the bill for the Grammys include pop starsAriana GrandeandBillie Eilish, rock legendsAerosmith, andThe Jonas Brothers, among many others. The show is being hosted byAlicia Keysfor the second year in a row.

Jonas Brothers Perform Epic Mashup Of ‘Sucker,’ ‘Jealous’ & ‘Cake By The Ocean’ At The 2019 BBMAs