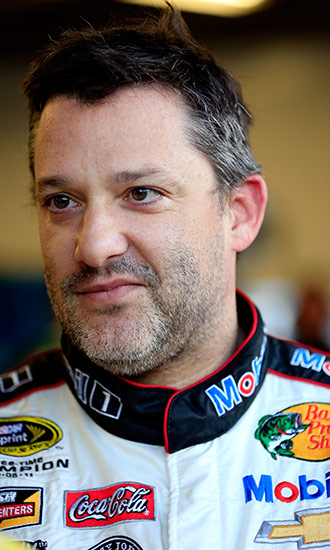 Bio:Tony Stewart (born Anthony Wayne Stewart) is an American auto racing driver. Tony has won titles for racing Indy cards, stock cars, sprint cars and many more. Tony owns his own racing team, Stewart-Haas Racing. As of August 2014, Tony drives the No. 14 Bass Pro Shops/Mobil 1 Chevrolet SS car in the NASCAR Sprint Cup Series for his racing team. Tony is the only racing driver to ever win the NASCAR championship under three different sponsorship titles. He won for Winston in 2002, Nextel in 2005 and then Sprint in 2011. He is the only driver to win both the Winston Cup (under an old points system) and the Nextel Cup (under the chase playoff format). Tony also has the longest record of driving one car for the same team with both the same sponsor and crew chief. For 10 years, Tony drove the No. 20 Joe Gibbs Racing car for Home Depot with crew chief Greg Zipadelli  — that’s a NASCAR record. In 2013, Tony was involved in a multi-car crash at a sprint car race in Iowa. He had multiple leg injuries, but was medically cleared to race for the 2014 season.

Personal Life:Tony reportedly dated Jessica Zemken, who is part of a famous racing family, for many years. He once stated in a Q&A session that he’d “go out with” fellow driver Danica Patrick.