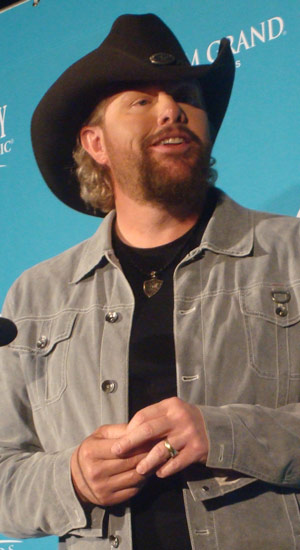 Bio:Toby Keith (born in Clinton, Oklahoma on July 8, 1961) is an American country singer, record producer, and actor. His interest in music was sparked at an early age, receiving his first guitar at the age of eight. However, Toby went on to play football in high school, and upon graduation worked in the nearby oil fields. Meanwhile, Toby and his friends created the band Easy Money, and played in the local bars. When the oil industry went south, Toby focused on his music career and caught the break of a lifetime when he was signed to Mercury Records. His very first single and debut album skyrocketed on the charts and became certified platinum. Keith spent the 90’s releasing chart-topping singles and studio albums. In 2002 his album Unleashed debuted at number one on the country and pop charts. With almost twenty years in the music industry, Toby has released fifteen studio albums, two Christmas albums and three compilation albums. In 2011 Toby received the honor of “Artist of the Decade” by the American Country Awards. Toby has also appeared in TV and movie rolls, owns Show Dog Daddy, is a restaurant owner, owns a clothing line and has made many trips to the Middle east to bring entertainment to U.S. troops.

Best Known For:Toby has been married to his wife Tricia Lucus since 1984. Together they have three children: Shelley, Krystal Keith, and Stelen. They also have two grandchildren from daughter Shelley. Keith frequently sings with daughter Krystal Keith who is an aspiring country singer.

Personal Life:Toby is a country music sensation! He is best known for his controversial “Courtesy of the Red, White and Blue” which was in response to 9/11 and his feud with Natalie Maines from the Dixie Chicks.