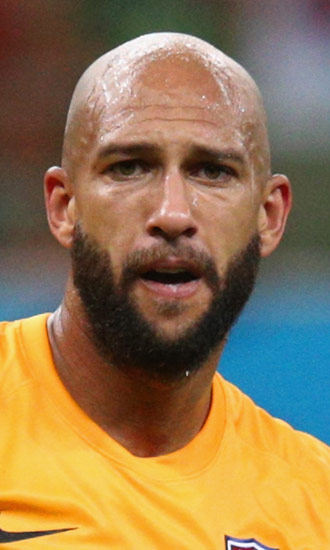 Bio:Tim Howard, born Timothy Matthew Howard, is an American soccer player who plays as a goalkeeper for the English club Everton, as well as for the U.S. national team. Born in New Jersey, Tim began his career in 1997 with the North Jersey Imperials before moving on to the MetroStars from 1998 to 2003. In 2003, he was signed to to Manchester United, and remained there until 2006, when he went on loan to Everton, who signed him permanently in 2007. He has been on the U.S. national team since 2002, but was an unused substitute for the 2006 World Cup. For the 2010 World Cup, he established himself as first-choice and opened each of the United States’ games. It was during the 2014 FIFA World Cup where he received his 100th cap for the United States.

Best Known For:Tim Howard is best known for playing through the pain. In 2007, he dislocated one of his fingers during a friendly with the U.S. against Brazil, and in 2013, he broke two bones in his back during an FA Cup game against Oldham Athletic. During both of these games, he played until the final whistle.

Personal Life:Tim Howard is married to Laura Howard; they tied the knot two days after he was signed to Manchester United in 2003. They have two children together. Tim holds dual American/Hungarian citizenship, is an outspoken Christian, and he has been diagnosed with Tourette’s syndrome. He is also a PETA advocate, bearing torso and arm tattoos for their “Ink, Not Mink” anti-fur campaign.