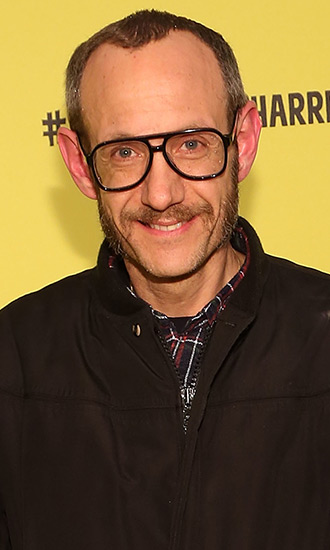 Bio:Terry Richardson (born Terrance Richardson on August 14, 1965 in New York City, New York) is an American fashion and portrait photographer. Terry lived with his parents in New York City until their divorce. He moved with his mother to Woodstock, NY, before they relocated to Ojai, California. Initially, Terry wanted to be a punk rock musician, but soon discovered his talents at photography while photographing the punk rock scene in his neighborhood of Ojai. Terry moved back to New York City in 1992. While photographing the New York City nightlife, He experienced his first big break in 1994 when his photos were published in Vibe magazine. This launched Terry’s career, as he was hired to shoot the advertising campaigns for such fashion brands as Marc Jacobs, Aldo, Supreme, Tom Ford, Yves Saint Laurent and more. Terry also shot photography for magazines like Rolling Stone, GQ, Vogue and Vanity Fair. In addition to photography, Terry has directed music videos for musicians Beyonce, Lady Gaga, Death In Vegas and Primal Scream.

Best Known For:Terry is known for being a high profile fashion and commercial photographer.

Personal Life:Terry married model Nikki Ubert in 1996. They divorced in 1999. He is the son of actress Norma Kessler and fashion photographer, Bob Richardson. Before he was a photographer, Terry played bass in the punk bands The Invisible Government, Signal Street Alcoholics, Baby Fist and Middle Finger. Terry has been accused of sexual misconduct during his fashion shoots, allegedly coercing models to engage in undesired sexual behavior.

How Often Should You Get A Bikini Wax? Expert Tips For a Sexy, Hairless Summer