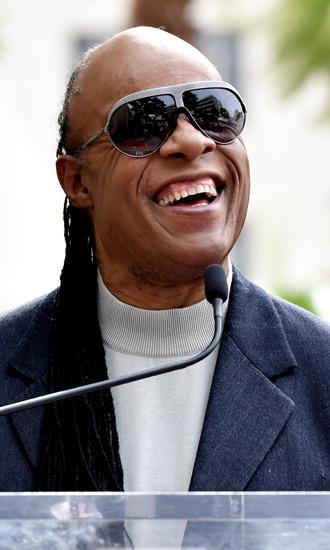 Stevie Wonder (born Stevland Hardaway Judkins in Saginaw, Michigan, on May 13, 1950) is an American singer, songwriter, musician, multi-instrumentalist and record producer. He is famously blind, having lost his vision after birth. As a child prodigy, Wonder signed with a label at the young age of eleven. With 25 Grammy Awards and over 30 top-ten hits in the United States, Wonder is one of the 60 best-selling artists of all time. He is ranked at number five on Billboard Magazine’s Hot 100 All-Time Top Artists list, and has sold over 100 million singles and albums. Recently, a Stevie Wonder Grammy Tribute Concert was held in his honor. Beyonce, Ed Sheeran and others performed Wonder classics at the concert.

Best Known For:Wonder is best known for being a highly-regarded singer/songwriter and musician.

Personal Life:Wonder’s mother, Lula Mae Hardaway, was also a songwriter. She passed away in 2006 at the age of 76. Wonder has nine children from five different relationships. He married singer/songwriter Syreeta Wright in 1970 and often collaborated with her, but they divorced in 1972. Wonder’s daughter, singer Aisha Morris, with Yolanda Simmons, also a singer. Aisha has accompanied Wonder on his tours and she is featured on his 2005 album A Time 2 Love. He remarried to fashion designer Kai Millard Morris in 2001, but they separated in 2009 and Wonder has since filed for divorce. They have two sons, Kailand and Mandla Kadjay. Kailand sometimes performs onstage with Wonder as a drummer. In December 2014, Wonder had a second child with Tomeeka Robyn Bracy, a daughter named Nia. As an activist, he oversaw a campaign in 1980 to make Martin Luther King Jr.‘s birthday into a national holiday.

Lady Loki: 5 Key Things To Know About The Character After ‘Loki’s Latest Twist

Michael B. Jordan & Girlfriend Lori Harvey Pack On The PDA During Dinner Date In LA — Photo