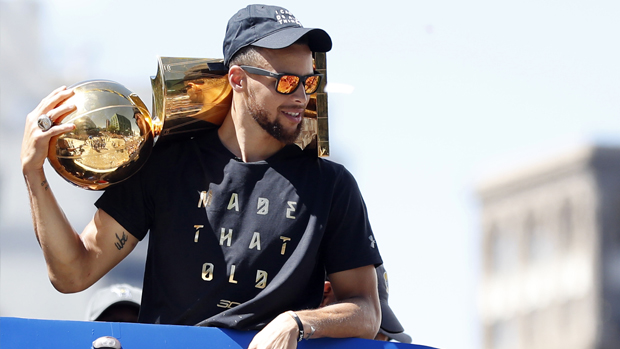 Bio:Steph Curry (born Wardell Stephen “Steph” Curry II on March 14, 1988 in Akron, Ohio) is an American professional basketball player. Stephen grew up in Charlotte, North Carolina because his father, Dell Curry, plated for the Charlotte Hornets from 1988-1998. Stephen and his family would follow his father, spending two years in Toronto while Dell played for the Raptors. While growing up, Stephen developed his own skills at the game. He led his grade 7 and 8 boys basketball team to an undefeated season. Stephen attended Charlotte Christian prep school, where he was named all-state, all-conference and led his team to three conference titles and three state playoff appearances. Stephen attended Davidson University. During his college basketball career, he was named the Southern Conference Player of the Year twice and set the all-time scoring record. As a sophomore, he set the single-season NCAA record for three-pointers. Though he opted out of his Senior year at Davidson, Stephen still plans to finish his degree. He was drafted to the Golden State Warriors in 2009. Since entering the NBA, Stephen has frequently been appointed to the All Star team and has set the season record for completed three-pointers. He is also has won two gold and one silver medals as a member of the USA men’s national basketball team.

Best Known For:Stephen is best known as a professional basketball player, particularly as a member of the Golden State Warriors.

Personal Life:  Stephen wears the same number, #30, that his dad wore when he played in the NBA. His younger brother, Seth Curry, is also a professional basketball player. Stephen is married to Ayesha Alexander. The couple has a daughter named Riley.