Now that’s how you get a show started! Silk Sonic kicked off the 2021 AMAs with an incredible performance to their new hit ‘Smokin Out The Window.’

Silk Sonicstarted off the 2021 American Music Awards with a bang! The R&B superduo, comprised of Bruno Mars and Anderson .Paak, opened the awards show hosted by Cardi B. on Nov. 21 with a performance to their new song “Smokin Out The Window.” The pair and their backup dancers and singers were all dressed in matching red suits as they got the audience on their feet dancing during the dazzling performance.

You got me out here still thinking about that performance, @silksonic! Tune into the #AMAs happening now on ABC. #SilkSonicAMAs pic.twitter.com/RSlTY6kMSd

Silk Sonic is nominated for three AMAs: Favorite Music Video, Favorite R&B Song (both for “Leave the Door Open”), and Favorite Duo or Group — Pop. They won the AMA in the Favorite R&B Song category. In the third category, they are up against AJR, BTS, Glass Animals, and Maroon 5. Silk Sonic only formed earlier this year, so this is obviously the first time the music duo has been nominated for AMAs. 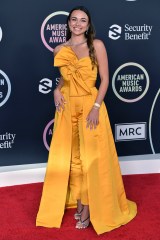 It’s been a great year for Silk Sonic. They previously performed their hit single “Leave the Door Open” at the 2021 Grammy Awards on March 14. They sang the hit tune again at the iHeartRadio Music Awards in May, followed by the BET Awards on June 27. And every time, their performance is nothing short of spectacular. Silk Sonic really is dominating!

The 2021 AMAs have a spectacular line-up of performers, Silk Sonic included. Megan Thee Stallion, Coldplay and BTS, Olivia Rodrigo, Carrie Underwood and Jason Aldean, Kane Brown, Diplo, Chloe Bailey, and more artists will be taking the stage to perform throughout the show. Cardi, 29, is hosting for the first time.

Todd Chrisley’s Kids: What To Know About The Reality Star’s 5 Kids & His Relationships With Them

Joy Villa: 5 Things To Know About Singer Who Wore Pro-Trump Dress At The Grammys