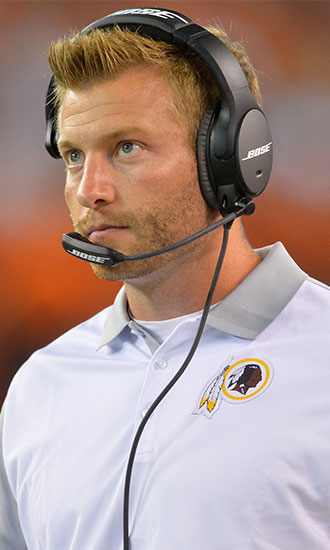 Bio:Sean McVay (born January 24, 1986 in Marietta, GA) is the head coach for the NFL’s Los Angeles Rams. He attended Marist High School outside Atlanta, GA before graduating from Miami University in Ohio. In 2008, he became the assistant wide receivers coach fort the Tampa Bay Buccaneers and in 2010 moved on to the Washington Redskins where he was the assistant tight ends coach. He was elevated to coach of that position from 2011-2013. He was promoted to the huge position of offensive coordinator for the team in 2014. On Jan. 12 2017 it was announced that he is the new head coach of the Los Angeles Rams, at age 30 becoming the youngest ever head coach in NFL history.

Best Known For:Sean is best known for being the Los Angeles Rams new head coach and the youngest head coach in NFL history.

Personal Life:Sean is part of a football legacy family. His grandfather John McVay was the General Manager of the San Francisco 49ers when they won five Super Bowls during their dynasty years.