Tennyson Crowe is looking more like his father, Russell Crowe, than ever in new photos shared by mom Danielle Spencer to celebrate his 15th birthday.

Tennyson Spencer Crowe, 15, really is his father’s mini-me! The youngest son of Russell Crowe, 57, and Danielle Spencer, 52,couldn’t look more similar to theGladiatoractor in new photos shared by Danielle on Wednesday, July 7. Danielle’s Instagram post celebrated Tennyson on his 15th birthday with both throwback photos and new photos of the teen, who is a true look-a-like of Russell. “It’s my youngest son’s birthday today, he is 15! Can’t believe it..Happy Birthday Tennyson! Love you,” Danielle wrote in her post.

Fans rarely get a glimpse of Tennyson on social media. But on May 9, Mother’s Day, Danielle — an actress and singer from Australia — shared a rare photo with both Tennyson and 17-year-old sonCharles Spencer Crowe, her eldest child with Russell. The brothers, who have both inherited their father’s genes, posed on either side of Danielle in the sweet family snapshot.

Russell and Danielle first became romantically entangled in 1989, after working together on the movie The Crossing, according to Closer Weekly. They began an on-again/off-again relationship that spanned decades before they tied the knot in awedding ceremony on Russell’s property in Nana Glen, a small village in New South Wales, Australia, in 2003. Later in 2013, they welcomed son Charles.Tennyson arrived three years later in 2006. The couple stayed together until their separation in October 2012, and they finalized their divorce six years later. 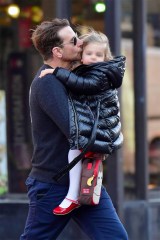 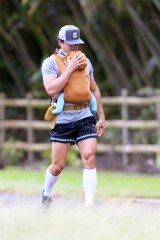 Since their split, Russell and Danielle seem to still have a good co-parenting relationship.“The marriage ended, but that didn’t mean our friendship ended. We’ve had holidays together in the past and we can happily sit down and chat,” Danielle told the Daily Telegraph last year. “We have a lot of respect for each other and I consider him to be a member of my family.”

Russell has since found new love with 30-year-old girlfriendBritney Theriot, anactress-turned-real estate agent.The pair were most recently seen together in March playingtenniswith each other against friends inSydney, Australia. Russell is believed to have met Britney on the set of his movie Broken City way back in 2013. They haveyet to confirm their romance.

Megan Fox Claps Back At ‘Mean, Awful, People’ Who Pick On Her Son, 8, For Wearing Dresses

Ben Affleck Gushes Over Ex J.Lo’s Ageless Beauty: ‘You Look The Same As You Did In 2003’