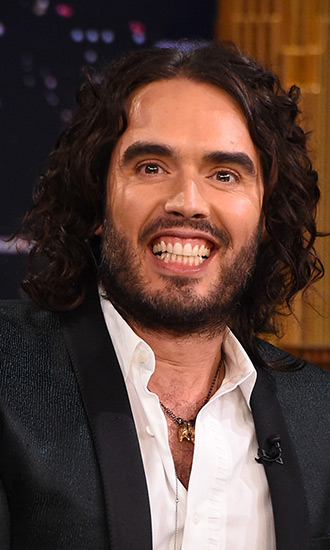 Bio:Russell Brand (born Russell Edward Brand on June 4, 1975 in Grays, Essex, England) is an English actor, comedian and author. He starred in the films Arthur, Forgetting Sarah Marshall and Get Him to the Greek. In the latter two movies, Brand plays the same character, Aldous Snow. Brand has also dabbled in voice acting, as in for the movies Hop and Despicable Me 2. Brand is known for his rambunctious style of comedy and often delivers meandering rants in interviews. As an author, Brand has released two memoirs: My Booky Wook and Booky Wook 2. His most recent project is the 2014 political novel titled Revolution.

Best Known For:Russell Brand is best known for starring in Get Him to the Greek and for his relationship with singer Katy Perry.

Brand met Katy Perry in 2009, and they wed in 2010 before divorcing in 2012. In 2013, Brand dated British socialite Jemima Khan, though they split in 2014. Brand is diagnosed with bipolar disorder and ADHD (attention deficit hyperactivity disorder). In the past, he has suffered from bulimia, self-harm and substance abuse. He has been sober since 2002.

Brad Pitt, 55, Is Lookin’ Like A Snack In A Full Tuxedo At ‘Ad Astra’s Venice Film Festival Premiere