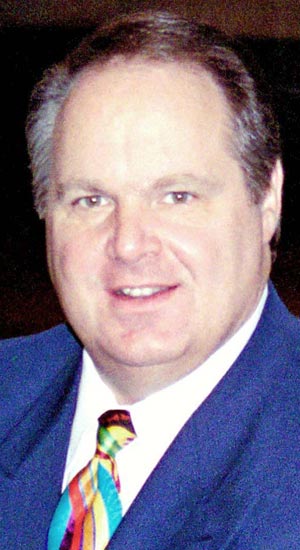 Bio:Rush Limbaugh (born Rush Hudson Limbaugh III in Cape Girardeau, Missouri, on January 12, 1951) is an American radio talk show host and political commentator. He is best known as the host of his radio talk show, The Rush Limbaugh Show, which airs for three hours every week day on AM and FM radio. Limbaugh indentifies himself as politically conservative, which is the basis of the majority of his talk show content. He has a strong radio following among conservatives and members of the Republican Party. Limbaugh is the highest-paid syndicated radio talk show host.

Personal Life:Limbaugh has been married four times, but has no children. His addiction to prescription drugs has been a major point of controversy during his career, resulting in several arrests and fines. He is also active in charity, and hosts an annual telethon for the Leukemia and Lymphoma Society and an annual drive to help the Marine Corps – Law Enforcement Foundation.