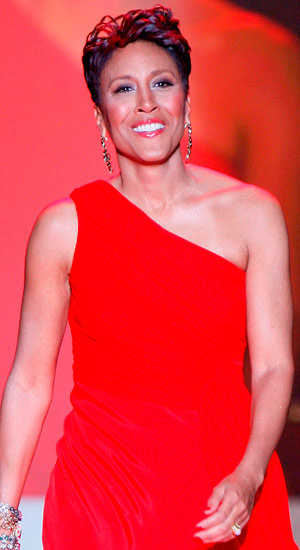 Bio:Robin Roberts (born in Pass Christian, Mississippi on November 23, 1960) is an accomplished television broadcaster and news anchor. She is a media icon who graduated from Southeastern Louisiana University with a degree in communication. In college, she was also a stellar athlete in both women’s tennis and basketball. This passion for sports led her to her first broadcasting opportunity in 1983 as a sports anchor and reporter for WDAM-TV in Mississippi. She finished out the 80s covering sports in Atlanta and Tennessee, until landing a sportscaster gig at ESPN in 1990. Five years later, she was welcomed into the ABC family, working as a reporter for Good Morning America. After ten years, Robin was promoted to co-anchor of Good Morning America. Robin has endured a few public health scares, which she has shared in the public eye. In 2007, she was diagnosed with breast cancer. She remained on the air while going through chemotherapy and radiation. Five years later, Robin announced that she has the condition, MDS, a disease formerly known as preleukemia. However, throughout her journey, she has remained optimistic and gracious of the support from her fans and GMA family.

Best Known For:Robin Roberts is best known as a co-anchor on Good Morning America, and many believe it was she who helped bring the ABC morning show’s ratings up, making it NBC’s TODAY Show’s biggest competitor.

Personal Life:Robin has and continues to battle her health in front of millions of people worldwide. She is a fighter who has battled breast cancer, and is currently battling MDS. She is extremely close to her family and in touch with her faith, both of which have helped her along her inspirational journey. She began her career almost thirty years ago and has delivered passionate interviews and emotional reports on ESPN and Good Morning America. Some might argue that Robin’s career is her personal life.