Rihanna showed support for athlete Sha’Carri Richardson after her Olympics disqualification — and made a joke about the cardboard beds in the athletes’ village.

Rihanna sent words of support to track and field sprinter Sha’Carri Richardson — and nonchalantly mocked the cardboard beds at the upcoming 2021 Tokyo Olympics. The athlete, 21, shared a series of mirror selfies on Instagram on Monday, July 19, rocking an open-back metallic silver dress. Rihanna, 33, however, had her eyes set on the bed in the room — one that is notably not made of cardboard.

The “Love on the Brain” singer wrote in the comments section: “yassss for the non cardboard bed,” a not-so subtle dig at the bedding that Olympic athletes will be resting their heads on in the athletes’ village.

Japanese bedding company Airweave will supply athletes with beds made of recyclable polyethylene, described as “high resistance lightweight cardboard” with frames that could reportedly hold up to 441 pounds. Olympic organizer Takashi Kitajima previously told media in September 2019 that the decision was rooted in both comfort and sustainability.

The beds “will be recycled into paper products after the Games, with the mattress components recycled into new plastic products,” per the initial press release.“This will be the first time in Olympic and Paralympic history that all beds and bedding are made almost entirely from renewable materials.” 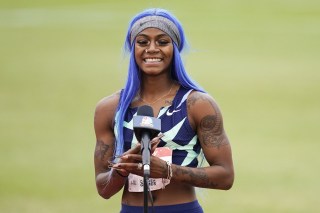 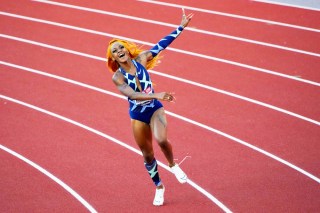 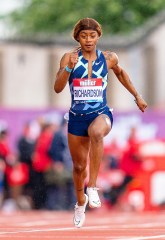 Rihanna’s IG comment is, of course, a response to Sha’Carri’s disqualification from the games after she tested positive for marijuana early this month. A strong Olympic medal contender, the decision sparked outrage from supporters and celebrities alike, including marijuana proponent Seth Rogen, who said: “The notion that weed is a problematic ‘drug’ is rooted in racism. It’s insane that Team USA would disqualify one of this country’s most talented athletes over thinking that’s rooted in hatred.”

The athlete apologized for the test in an interview with Today on July 2, explaining that she turned to marijuana after learning from a reporter that her biological mother passed away prior to her Olympic Trials in Oregon — where marijuana is legal. The death sent her into “a state of emotional panic.” Sha’Carri said, “I know what I’m supposed to do, and I know what I’m allowed not to do, and I still made that decision. I’m not making an excuse. Who am I to tell you how to cope? Who am I to tell you that you’re wrong for hurting?”

Halle Berry’s Kids: Everything To Know About Her Beautiful Daughter & Adorable Son