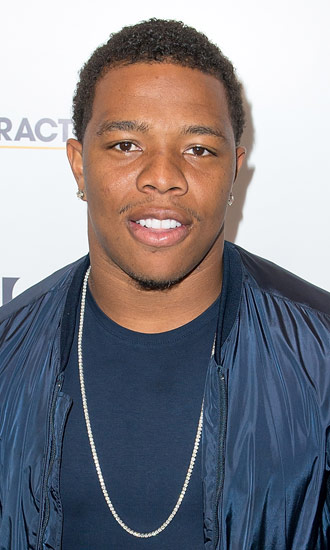 Bio:Ray Rice (born Raymell Mourice Rice in New Rochelle, New York on Jan. 22, 1987) is a former professional football running back. He played college football for Rutgers University, and was drafted by the Baltimore Ravens in the second round of the 2008 NFL Draft. Ray was arrested and subsequently indicted for third-degree aggravated assault on March 27, 2014 relating to an incident where he punched his wife, Janay Palmer, in the face on Feb. 15, 2014. The punch was so hard that it knocked her unconscious. TMZ released a video of the encounter, which lead to the Baltimore Ravens terminating Ray’s contract.

Best Known For:Ray Rice is best known for playing in the NFL and assaulting his wife, Janay Palmer.

Ray Rice and his now-wife, Janay Palmer, were arrested and charged with assault on Feb. 15, after a physical altercation at Revel Casino in Atlantic City, New Jersey. On March 27, 2014, a grand jury indicted Ray on third-degree aggravated assault, with a possible jail sentence of three to five years and a fine of up to $15,000. For the incident, Ray was initially suspended for the first two games of the 2014 NFL season. On September 8, 2014, TMZ released footage from an elevator camera, showing Ray punching Janay during the Feb. 15 incident. The Baltimore Ravens terminated Ray’s contract as a result and the NFL suspended him indefinitely. Ray married Janay on March 28, 2014 — they have a daughter together, Rayven Rice.