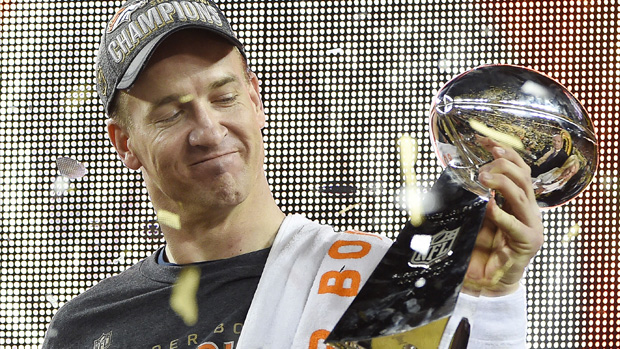 Bio:Peyton Manning (born Peyton Williams Manning in New Orleans, Louisiana, on March 24, 1976) is a former American football player for the Denver Broncos. He started his career at the University of Tennessee and led them to an SEC championship and then went on to be the first overall pick in the 1998 NFL Draft. He led the Colts to eight division championships and a Super Bowl championship. He was also named the best player in 2009 and player of the decade by Sports Illustrated and Fox Sports. On Oct. 19, 2014, he broke the touchdown pass record previously held by Brett Favre. A month after winning Super Bowl 50 in Feb. 2016, Peyton reportedly will announce his retirement. In 18 NFL seasons, Peyton was a 14-time Pro Bowl selection, 5-time NFL MVP, and 2-time Super Bowl Champion. As of 2016, he is the all-time leader in passing touchdowns with 539 and passing-yards (with 71,940.) He also holds the record as the oldest quarterback to start a Super Bowl, as he was 39 when he played in Super Bowl 50. After Super Bowl 50, Peyton announced his retirement from the NFL.

Best Known For:Peyton Manning is best known as an NFL player. He was the quarterback for the Denver Broncos, and prior to that, played 14 seasons for the Indianapolis Colts.

Personal Life:Peyton Manning married his wife, Ashley Thompson on St. Patricks Day in 2001. They were introduced by a friend and they have twins, Marshall Williams and Mosley Thompson. His brother is New York Giants star Eli Manning.