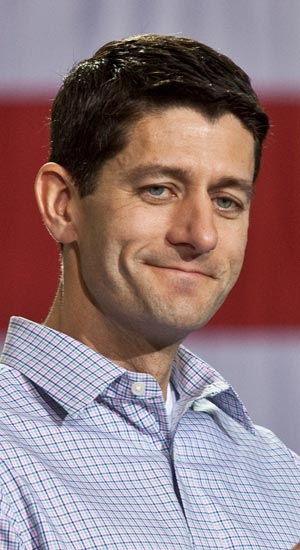 Bio:Paul Ryan (born Paul Davis Ryan in Janesville, Wisconsin on January 29, 1970) is an American politician. He is best known as the Republican vice presidential nominee in the 2012 United States presidential elections. He has been the US representative for Wisconsin’s First Congressional District since 1999. He is currently serving his seventh term. He is also the chairman of the House Budget Committee. Ryan’s candidacy against incumbent Vice President Joe Biden marks the first time in US history with Roman Catholics on the tickets of both major parties. Ryan’s most passionate issues are his proposed Medicare changes and the future of economic policy.

Personal Life:Paul Ryan married Janna Little in 2000. They continue to live in Ryan’s childhood hometown, Janesville, WI. The pair have three children together.

Kate Moss Is Red Hot On The Cover Of British 'Vogue'! Check Out How To Get Her Look!