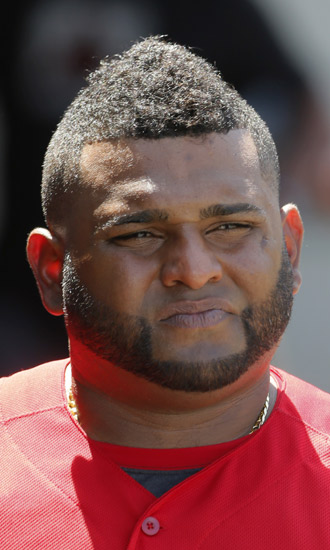 Bio:Pablo Sandoval (born Pablo Emilio Juan Pedro Sandoval Jr. on August 11, 1986 in Puerto Cabello, Venezuela) is a Venezuelan professional third baseman. He started his professional baseball career in the minor leagues in 2002. He was called up to the majors in 2008 to play for the San Francisco Giants. He was given the nickname “Kung Fu Panda” by teammate Barry Zito, because of his round figure0. Pablo has constantly been in the spotlight after an ongoing struggle with wait. In 2011, the Giants publicized a campaign called “Operation Panda,” to help Pablo loose weight. He lost 30+ pounds and his performance improved immensely. However, he gained his weight back and in 2014 he again, needed to lose. He became a free agent after the season ended and was picked up by the Boston Red Sox in November 2014. Pablo continued to make headlines and face criticism due to his weight, but in December 2016, he showed off a slimmer figure.

Best Known For:Pablo is best known as a third baseman in the MLB, currently on the Boston Red Sox.

Personal Life:Pablo’s brother Michael played for the Minnesota Twins from 1999 to 2004 and that played for San Jose in 2010. Pablo is a devout Roman Catholic and makes the sign of the cross after each base hit. He has a daughter, Yoleadny (born in 2006), from his marriage to Yoletzade Sandoval. He and Yoletzade divorced in 2010.