The 90th Academy Awards are just days away, which means Hollywood’s hottest stars are preparing for what they hope will be their best fashion moment! BUT, which gowns ruled the iconic red carpet in past years? — Find out here!

Actors and actresses in Hollywood give it their all when filming your favorite movies, all to earn themselves a coveted Oscar. The Oscars, otherwise known as the Academy Awards, are also home to one of thee most prestigious red carpets of the year.Designers, as well as celebrities spend months choosing the right color, silhouette, and statement gowns in hopes of landing on the best dressed list after the awards show. However, not every star can shine on the Oscars red carpet. Ultimately, we’ve seen fashion mishaps and fails through the years. But, we’ve also witnessed stunning, head-turning looks, which is why we need your help!

Below, we’ve presented you with a red carpet poll ahead of the 2018 Oscars. Once you begin the poll, you’ll see eight side-by-side images of past Oscars looks, such as Jennifer Lawrence‘s first-ever red carpet dress and Halle Berry‘s memorable 2002 burgundyEllie Saab gown. In a series of slides, you’ll be given the chance to choose who wore it best, where these stars and more will be pitted against one another to ultimately decide who had the best Oscars dresses of all time. Our simple and easy poll will take you back in time to relive the Oscars’ best and possibly worst red carpet moments through the years. Cast your votes below!

Now that you’ve conquered our Oscars poll, below you will see our exclusive fashion bracket, which coincides with the poll. The bracket allows you follow along with us leading up to the show and will organize your best dressed picks from past dresses. There are 16 total stars to choose from, including Jennifer Lopez, Mila Kunis and more, which will eventually come down to one winner, set to be announced on March 4; the night of the 2018 Oscars. Check out the bracket, as well as the official voting schedule: 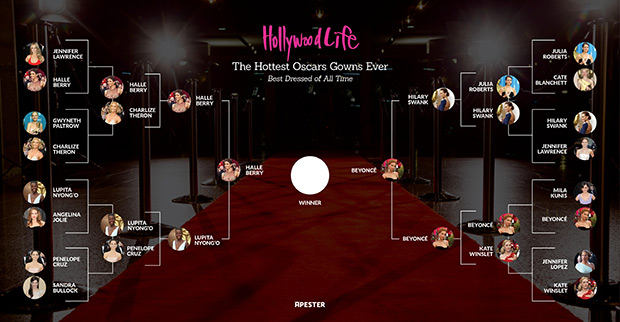