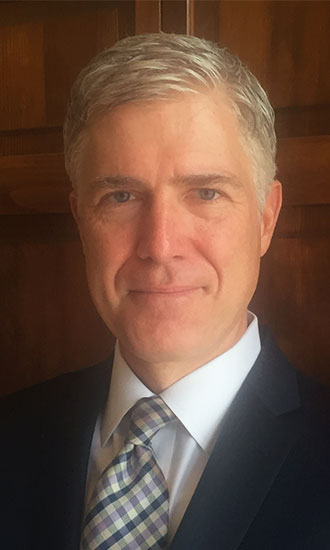 Bio:Neil Gorsuch (born Neil McGill Gorsuch, in Denver, CO on Aug. 29, 1967) is a United States Circuit Judge of the United States Court of Appeals for the Tenth Circuit, in which he was nominated by President George W. Bush in 2006. He is an advocate of originalism, which is the idea that the Constitution should be followed as the Founding Fathers would have. He is a proponent of textualism, which is a legal theory that courts in the US should go by the plain meaning of words in the Constitution and in other laws. Neil clerked for Judge David B. Sentelle on the United States Court of Appeals for the D.C. Circuit. Then, he clerked for Justices Byron White and Anthony Kennedy on the Supreme Court. Neil received his B.A. from Columbia University, and his J.D. from Harvard Law School. He earned his Doctorate of Legal Philosophy from Oxford University, where he studied at University College as a Marshall Scholar. Gorsuch’s been praised for his writing abilities. On Jan. 31, 2017, President Donald Trump selected Neil as his pick to fill the empty Supreme Court vacancy left by the death of Antonin Scalia.

Personal Life:Neil Gorsuch resides in Boulder, CO, with his wife Louise and their two daughters. He is the son of Anne Gorsuch Burford, the first female head of the US Environmental Protection Agency.