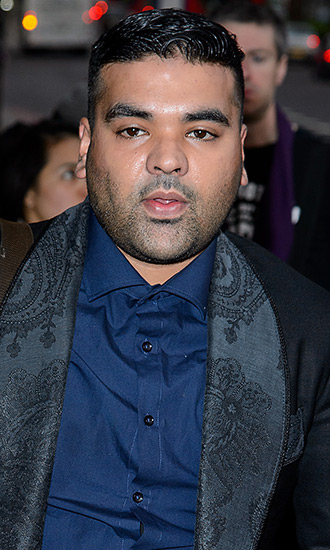 Bio:Naughty Boy (born Shahid Khan on March 13, 1985 in Watford, Hertfordshire, England) is an English DJ, songwriter and record producer. Naughty Boy’s big break came in 2009, after he co-wrote and produced Chipmunk‘s hit single, “Diamond Rings.” The song was the first time Naughty worked with singer Emily Sandé. Together, they would co-write and produce her debut album, Our Version Of Events. Emile would sing on Naughty Boy’s first single, “Wonder,” which peaked at number 10 on the UK Singles Chart in 2012. In May 2013, Naughty Boy’s breakout success came with his second single, “La La La,” featuring singer Sam Smith. Later that year, he released his debut album, Hotel Cabana. As a producer, Naughty Boy has collaborated with singers like Ed Sheeran, Rihanna, Britney Spears and Lily Allen. In 2015, Naughty Boy confirmed that he was working with former One Direction member Zayn Malik. During a twitter spat with Louis Tomlinson, Naughty Boy would leak a demo of a Zayn’s first post-One Direction solo song, “I Won’t Mind.”

He is the son of Pakistani immigrants. Naughty Boy began to pursue music after dropping out of London Guildhall University. He was awarded a £5,000 grant by The Princess Trust to start up his business in 2006. In 2006, he appeared on the UK edition of Deal Or No Deal, winning £44,000 to further help finance his production career.