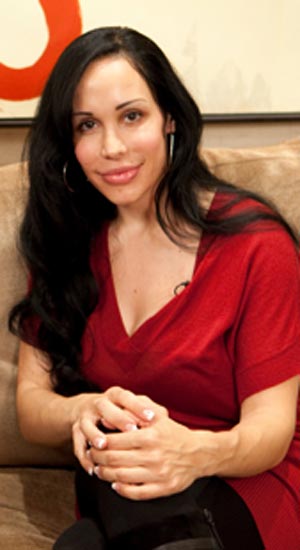 Bio:Nadya ‘Octomom’ Suleman (born Nadya Suleman in Fullerton, California on July 11 1975) is an American woman who received international attention and celebrity status when she gave birth to octuplets in January 2009. The Suleman octuplets are only the second full set of octuplets to be born alive in the United States. Octomom received mostly negative press, including death threats due to her planting ALL 8 embryos by choice. She rejected suggestions that her decision to have all eight children was selfish, scoffing at the idea that she may not be able to care for her children. Suleman has appeared on multiple television shows, starting with an interview with Ann Curry in February 2009. In addition, Fox aired a special on Nadya, titled Octo-mom: The Incredible Unseen Footage, which aired on August 19, 2009. In the summer of 2012, Nadya appeared in the adult film Octomom Home Alone. The sex tape received four AVN Award nominations and won one for Best Celebrity Video.

Best Known For:Octomom is best known for having octuplets.

Personal Life:Octomom has never revealed the father of the children. She started dating bodybuilder Frankie Grageda in 2012.