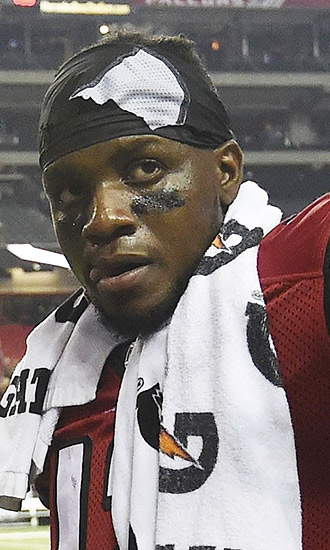 Bio:Mohamed Sanu (born Mohammed Sanu Sr. on August 23, 1989 in Sayreville, New Jesey) is an American professional football player. Though born in New Jersey, Mohamed grew up in Sierra Leone, the native country of his Muslim family. He returned to New Jersey to attend South Brunswick High School. He enrolled in Rutgers University in 2009, graduating from high school six months early. As a true freshman, he had 51 receptions for 639 yards and three touchdowns, as well as 62 carries for 346 yards and five touchdowns. This success led him to win Most Valuable Player at the 2009 St. Petersburg Bowl. He played for Rutgers for three seasons, before the Cincinnati Bengals picked him as the 83rd overall pick in the 2012 NFL Draft. Mohamed recorded his first NFL touchdown pass before his first NFL reception: during a 2012 game with the Washington Redskins, a trick play saw Mohamed throw to Bengals’ quarterback A.J. Green. Though his role with the Bengals would increase over the following four seasons, he opted to sign with a five-year, $32.5 million contract with the Atlanta Falcons ahead of the 2016 NFL Season. He became a valued member of the Atlanta Falcons‘ offense, helping to lead them to the 2017 NFC Championship Game.

Personal Life:Mohamed proposed to his girlfriend, Lauren Mackenzie, during a Premier League soccer game in London. During the 83rd minute of a Feb. 2016 Liverpool-Manchester City matchup, he got down on one knee. She said yes. Mohamed and Lauren have a child together, Mohamed Jr. In 2014, Mohamed began offering stock in his brand via a venture with Fantex, Inc, offering Fantex a 10% share of his future earnings from his brand. In Nov. 2014, the IPO was completed, selling 164,300 shares at $10 per share.