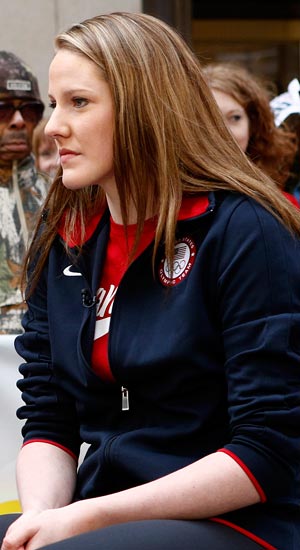 Bio:Missy Franklin (born Melissa Jeanette Franklin in Pasadena, California, on May 10, 1995) is an American swimmer and a member of the 2012 Olympic team. The high school senior’s speciality in backstroke, freestyle, and medley has made her a five-time medalist at the World Aquatics Championship. In 2011, at just 16 years old, Missy secured her first world record in the 200-meter backstroke, and that same year, she was named best female swimmer by FINA Aquatics World Magazine. With both parents originating from Canada, Missy has dual citizenship and her mother once suggested representing Canada, because of the strength and depth within USA Swimming. Missy refused, and it seems this teenaged swim star can handle the competition just fine.

Best Known For:Described as the next Michael Phelps, Missy is the first American woman to qualify for seven events in this summer’s Olympic games in London – all this, at just 17 years old.

Personal Life:As if the 2012 London Olympics aren’t enough to look forward to in the next few months, Missy will also be starting her senior year of high school this fall. The down-to-earth athlete still attends Regis Jesuit High School in suburban Denver, and her formal education won’t stop when she receives her high school diploma next spring. Missy and her parents have turned down countless offers for the swimmer to go pro, and are insistent that she will go on to swim for a university.

Kate Hudson’s Son, Ryder, 17, Is Her Twin But Towers Above Her In New ‘Squad’ Pic Together