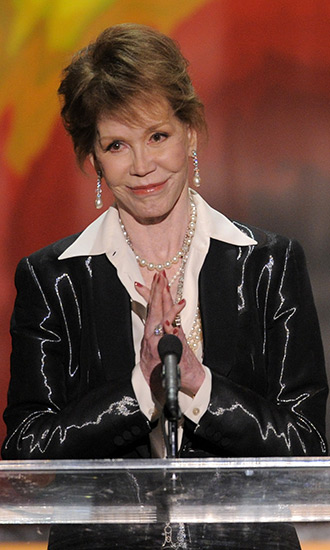 Bio:Mary Tyler Moore (born in Brooklyn, New York on Dec. 29, 1936) was an American actress who was famous for her roles in television shows during the 1960s and 70s. Mary started her career in TV at the age of 17, when she decided that she wanted to be a dancer. Her television debut came in the 1950s on “Happy Hotpoint,” where she portrayed a tiny elf dancing on Hotpoint appliances in commercials during the series Ozzie and Harriet. She appeared in approximately 39 Hotpoint commercials before leaving the gig. Mary’s first regular television job came in the late 50s as a glamorous telephone receptionist on Richard Diamond, Private Detective. At the same time, she also guest starred on Johnny Staccato, and 1960 shows, Bourbon Street Beat, 77 Sunset Strip, Surfside Six, and Wanted: Dead or Alive. Mary got her big break in 1961, when she was cast in the acclaimed show The Dick Van Dyke Show, which chronicled Carl Reiner’s life and career. At the age of 24, Mary portrayed TV wife Laura Petrie, whose comedic performances later won the actress an Emmy. The show was cancelled in 1966 after five seasons. During her break from TV, Mary starred in a number of feature films including Thoroughly Modern Millie with Julie Andrews and Change of Habit, opposite of Elvis Presley. But in 1970, the actress returned to the small screen for her very own show on CBS, The Mary Tyler Moore Show, a newsroom sitcom that followed the life of an ordinary working woman. For six seasons the show’s ratings made it in the top 20 list, and its seventh season earned an Emmy for Outstanding Comedy Series in 1977. All in all, the series held the highest record for 29 Emmy Awards earned, until its record was broken by Frasier. After her show went off in 1977, Mary went on to guest star in other hit TV shows including, The Ellen Show, That 70s Show, and Hot in Cleveland. Mary also starred in a number of theater performance during the 80s, including the musical of Breakfast at Tiffany’s and Whose Life Is It Anyway. Mary was taken to  a Connecticut hospital in late Jan. 2017 after suffering from multiple health problems, and sadly passed away on Jan. 25, 2017.

Personal Life:Mary Tyler Moore married her first husband Richard Carleton Meeker at the age of 18 in 1955. Fairly soon after, she became pregnant with her first child Richard Jr. The couple divorced six years later in 1961. In 1962, Marry wed her second husband CBS executive Grant Tinker. Together, the couple formed their production company called MTM Enterprises. Mary’s first born died in 1980 of an accidental, self-inflicted gunshot to the head. She and Grant got a divorce in 1981. Two years later in 1983, Mary met Dr. Robert Levine at a hospital while she was visiting her mother, who was being treated by him. They got married that same year. Mary was also known for her outstanding charity work, including her donations to the research and development for diabetes.