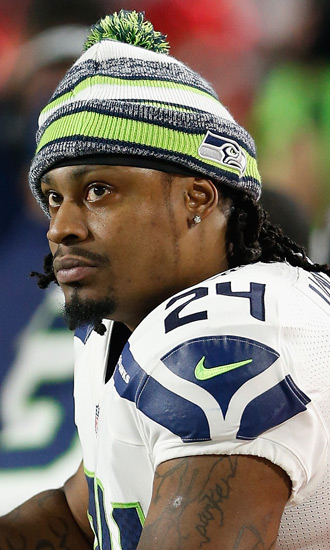 Bio:Marshawn Lynch (born Marshawn “Deebo” Terrell Lynch, in Oakland, California on April 22, 1986 ) is an American football running back for the NFL team, the Seattle Seahawks. he is known for his aggressive running style and his love for breaking tackles. He played college football for the University of California, Berkeley where he became the school’s second all-time career rusher. He was then drafted by the Buffalo Bills in the first round of the 2007 NFL Draft. In 2010 he started three games for the Bills before being traded to the Seattle Seahawks. In 2013 he received he contributed to his teams first Super Bowl victory and his first Super Bowl ring. The following year he helped his team advance back to the Super Bowl for the second year in a row.

Best Known For:Marshawn is best known for being a professional running back in the NFL and refusing to talk to the media.

Personal Life:Marshawn was arrested on July 14, 2012, by the California Highway Patrol for DUI. He is known for being reluctant to talk to the media and has been fined multiple times by the NFL. In 2015 he yet again tried to decline media interviews by showing up for only five minutes, and answering “I’m just here so I won’t get fined”. He also keeps his personal relationships private.