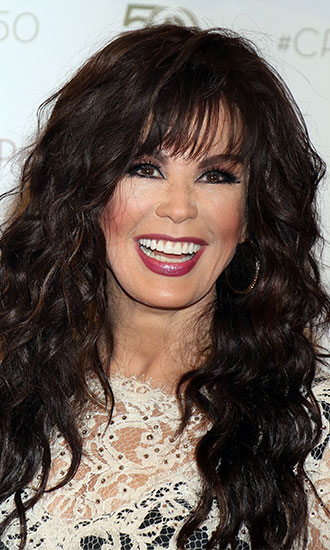 Bio:Marie Osmond (born Olive Marie Osmond in Ogden, Utah on October 13, 1959) was the only girl in a family of nine children. She joined her show business family and began performing at a young age. Marie had some solo success in 1973 with her hit single “Paper Roses.” She continued to be involved in Hollywood over the years on television, musicals, and albums. Marie even appeared on Season 5 of Dancing With The Stars.

Best Known For:Marie is best known for her dynamic partnership with her brother Donny, which spurred the television show in Donny & Marie in 1973. They still perform in Las Vegas together and tour. Marie is also known for the multiple hardships she has faced in her life and overcome.

Personal Life:Marie detailed in her first memoir Behind the Smile: My Journey Out of Postpartum Depression her struggle with postpartum depression after the birth of her son Matthew. She also wrote about her experiences being sexually abused as a child. Marie married Stephen Craig in 1985 and they had a son named Stephen together. The couple later divorced and Marie married Brian Blosil. The couple had two children together and adopted five. They later divorced and Marie would remarry Stephen Craig in 2011. Sadly, Marie’s son Michael committed suicide in February 2010.