Madonna took the stage at Ginny’s Supper Club in Harlem, NY for a Belvedere Vodka party where she performed some of her most iconic hits!

Madonna has no qualms about rocking a sexy outfit at 63. The legendary singer sported an ultra sexy black dress with a high slit for a midnight concert at a Belvedere Vodka event at Ginny’s Supper Club in Harlem, NY on Friday, Oct. 9. She paired the long-sleeved satin ensemble with a fishnet tight and platform shoe, adding a newsboy style cap at one point during the performance.

She looked incredible as she performed atop a piano and stage, selecting songs from her upcoming filmMadame Xalong with tunes like “Like A Prayer” and “La Isla Bonita.” Musician Jon Batiste, 34, also took the stage with her, leading a “love riot” out onto the streets of the Harlem neighborhood! The jazz parade ended up at a local church near the iconic Apollo Theatre where she concluded with “Like A Prayer.”

Ahead of the performance, Madonna sipped a red Belvedere cocktail (dubbed ‘The Madame X’, consisting ofBelvedere Vodka, pomegranate juice, lime juice, honey) as she wore a plunging, sheer black mini dress with a bustier style bra. Her glam was on point, too, with long blonde extensions and a dramatic bang, along with a fall-ready burgundy nail and matching lip.

Madonna: See Photos Of The Singer 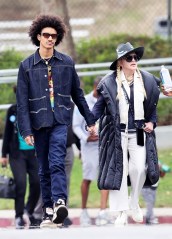 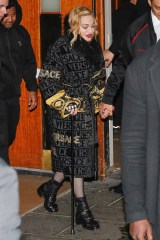 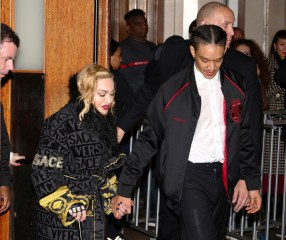 Madonna’s daughter Lourdes Leon, 24, was amongst those in the intimate crowed, along with Steven Klein, Aquaria, Julia Fox, Gabe Ocasio-Cortez, and herMadame Xdirectors Ricardo Gomes and SKNX.

The sexy performance comes hot off the heels of her eyebrow raising appearance onThe Tonight Show with Jimmy Fallonwhere she sprawled across his desk in a cheeky bodysuit.“Artists are here to disturb the peace,” she proclaimed, quoting writer James Baldwin on Thursday, Oct. 7. Jimmy quickly took off his blazer to cover her, as Madonna retorted, “nobody’s going to see anything, my god.”

“I hope that I have disturbed not only your peace this afternoon but people’s peace while they watch the show, but I mean that in the best way,” Madonna also said.

Carrie Underwood On Her Marriage: ‘We Are Good’ Amidst Miranda Lambert’s Divorce