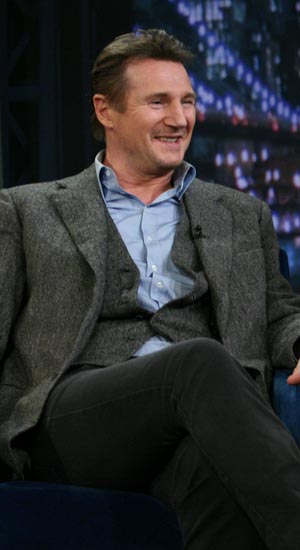 Bio:Liam Neeson (born William John Neeson in Ballymena, Ireland on June 7, 1952) is an Irish actor. He has starred in many notable films, like Schindler’s List, Taken, Star Wars, Batman Begins, Excalibur, Nell, Les Miserables, Love Actually, Kingdom of Heaven, Clash of the Titans, Wrath of the Titans, The A-Team, Unknown, and The Dark Knight Rises. He was nominated for an Oscar for his portrayal of Oskar Schindler in Schindler’s List.

Personal Life:Liam grew up in Ballymena, Ireland and attended St. Patrick’s College, Ballymena Technical College, and Queen’s University Belfast. After graduating, he moved to Dublin to begin his acting career. After spending some time in London, he moved to the US, where his career sky-rocketed. He married actress, Natasha Richardson, in 1994, and they had two sons together. In 2009, Natasha died, after suffering a severe head injury in a ski accident.