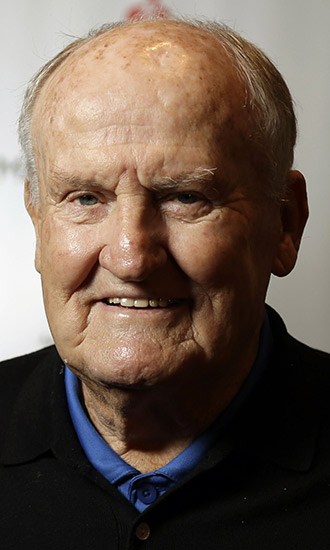 Bio:LaVell Edwards (born Reuben LaVell Edwards in Provo, Utah on Oct. 11, 1930) was an American head football coach for Brigham Young University (BYU) in Utah. He is ranked as one of the most successful college football coaches of all time. LaVell first began coaching football at BYU in 1972. Prior to taking the job, the BYU football team had been struggling and was in desperate need of help. LaVell was that savior who earned the team 257 victories throughout his career. He also guided the team to a national championship in 1984 and was honored with the National Coach of the Year award. LaVell has also coached prominent talents including quarterbacks Steve Young, Jim McMahon, Marc Wilson, Robbie Bosco, Gary Scheide, Gifford Nielsen, Steve Sarkisian, Virgil Carter, and 1990 Heisman Trophy recipient Ty Detmer. Just ahead of LaVell’s final game in 2000, BYU honored their beloved coach by renaming the football arena the LaVell Edwards stadium. He retired that same year, ranking sixth in all-time victories and second in all-time victories with a single coaching program.

Best Known For:LaVell Edwards is best known for coaching football at Brigham Young University from 1972 until 2000. He is recognized as the most successful college football coach of all-time.

Personal Life:LaVell Edwards remained a prominent leader of the LDS Church, which owns BYU, even after his retirement from coaching. LaVell also served as the National Advisor to ASCEND: A Humanitarian Alliance, a non-profit organization that plans expeditions to South Africa. On Dec. 24, 206, LaVell suffered from a broken hip. Only five days later on Dec. 29, 2016, he died at the age of 86.