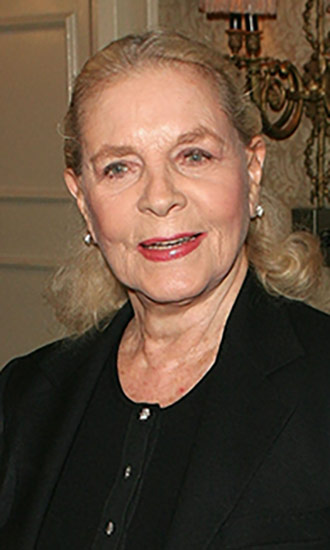 Also Known As:
The Look, Betty
Date of Birth:
September 16, 1924
Hometown:
The Bronx

Bio:Lauren Bacall (born Betty Joan Perske in The Bronx, New York, on September 16, 1924), is an American actress and model. Lauren made her acting debut in 1942 at 17 years old as a walk-on in the Broadway play Johnny 2 x 4. Lauren’s first starring role was in 1944’s To Have and Have Not alongside Humphrey Bogart. Lauren starred in films including How to Marry a Millionaire and Sex and the Single Girl. Lauren earned a Golden Globe Award and an Academy Award nomination for 1996’s The Mirror Has Two Faces. In 2009, Lauren was awarded an honorary Oscar. Lauren won Tony Awards for 1970’s Applause and 1981’s Woman of the Year.

Lauren Bacall’s romance with Humphrey Bogart is one of the most famous Hollywood love stories ever. The two met on the set of 1944’s To Have and Have Not when Lauren was 19 years old and Humphrey was 44 and married to his third wife, Mayo Methot. Humphrey left Mayo and married Lauren in 1945. The two starred in multiple movies together and remained a couple until his death in 1957. After Humphrey’s death, Lauren was engaged to Humphrey’s close friend, singer/actor Frank Sinatra. Frank broke up with Lauren without any reason. Lauren later married actor Jason Robards in 1961. They divorced in 1969. She is a mother of three. She had two children with Humphrey, Leslie Howard Bogart and Stephen Humphrey Bogart. She had one son with Jason, Sam Robards.