While on ‘Variety’s Awards Circuit’ podcast, Kristen Stewart responded to fan campaigns calling for her to be cast as Joker in a Batman film.

While Kristen Stewart loves the chaotic energy of fans calling for her to star as the Joker opposite ex-boyfriend Robert Pattinson’s Batman, she won’t be getting behind the idea anytime soon. With her ex slated to star as the caped crusader in The Batman, Kristen’s fans have been campaigning for her to take on the role of his nemesis. While on Variety’s Awards Circuit podcast on Wednesday, Oct. 20, however, Kristen shut down the idea.

“I love the energy behind that,” she told Variety when asked if she would ever consider the villainous role. “It’s really been done so well. I feel like, maybe, we don’t traipse over, but I love that gusto. Let’s figure something else out. I’m totally down to play a freaky, scary person.” When asked if her response was a definitive “no,” she added, “Not ‘no,’ but not the most stoked I’ve ever been. Let’s do something new.”

Kristen and Robert dated between 2009 and 2013 after meeting on set of their vampire romance film franchise Twilight. While she won’t take on the role of the villainous failed clown anytime soon, Kristen plays a softer, less “freaky, scary person” in the upcoming Spencer, a historical drama that follows the late Diana, Princess of Wales‘ Christmas holiday with the British royal family at Sandringham House in 1991, as she decides to leave her husband Prince Charles. 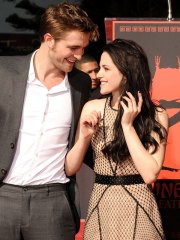 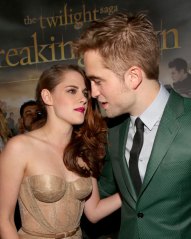 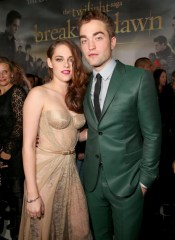 Kristen takes on the titular role of the People’s Princess, starring opposite Jack Farthing as Prince Charles in the Pablo Larraín-directed flick that has already begun to garner some award buzz for the actress. While at the Toronto International Film Festival in September, Kristen said she “very irresponsibly” agreed to the role of the famed princess before she even read the script, relying on her gut instinct.

“My favorite kinds of movies are explorations and cultivating that controlled chaos,” Kristen said. “That’s how you make discoveries that are worth photographing.” Thus, she didn’t feel pressure to be a perfect Diana. “She’s such a live wire and somebody who has this incredibly disarming, casual, contagious, beautiful, empathetic, warm energy that reaches out, but at the same time you always feel like there’s something wrong,” she continued.

“She’s protecting something,” Kristen said. “You never know what’s going to happen. . . so I knew there was no way to play this part perfectly and therefore it was easier, or at least easier to not be so intimidated and so daunted.” She added, “I could only be my version of that and kind of hope that if I learned everything about her and absorbed her and kind of meld, and be both me and her in some sort of weird way, it was going to be the best version.”