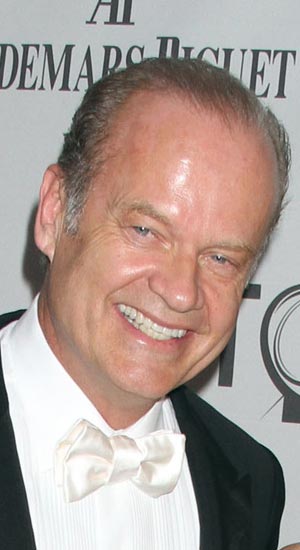 Bio:Kelsey Grammer (born Allen Kelsey Grammer on February 21, 1955) is an actor and comedian, widely known for his portrayal of psychiatrist Dr. Frasier Crane on the hit NBC sitcoms Cheers, Wings, and Frasier, from 1984-2004. Kelsey has won five Emmys in his career — all earned for his role as Frasier Crane. The actor has suffered many tragedies in his life including: in 1968, his estranged father was shot dead; in 1975, his younger sister, Karen, was abducted, raped, and murdered by spree killer Freddie Glenn; and in 1980, his twin half-brothers died in a scuba diving accident. Kelsey has been married four times and has five children.

Best Known For:Kelsey Grammer is best known for playing Dr. Frasier Krane for 20 years on both Cheers and its spinoff, Frasier.

Personal Life:Kelsey has been married four times and has five children. Before marrying current wife, Kayte Walsh, on Feb. 25, 2011 with whom he has a daughter, Faith, born on July 13, 2012, Kelsey was married to former Playboy model and The Real Housewives of Beverly Hills star, Camille Grammer, for 13 years. They have two children together Mason and Jude.