Due to being in the middle of a tour, Kelsea Ballerini couldn’t be at the CMT Artists of the Year event in person — but she looked great while performing from the road with the Jonas Brothers!

Kelsea Ballerini couldn’t be in Nashville to attend theCMT Artists of the Year event in person, despite being one of the honorees at the special ceremony. However, she was still able to perform at the show via a virtual set from her tour with theJonas Brothers! Kelsea was joined by her tourmates,Nick Jonas, Joe Jonas andKevin Jonas, for a performance of “With A Little Help From My Friends” byThe Beatles, which aired during the Artists of the Year telecast.

For the high-energy performance, Kelsea sparkled in a glittering outfit. Her black mini dress was covered in gold beading, and she looked stunning with her hair pulled back into a tight ponytail. She paired the look with gold booties and smokey eye makeup, with her skin glowing under the bright lights.

This was Kelsea’s first time being recognized as an Artist of the Year by CMT. Her fellow honorees wereGabby Barrett, Luke Combs, Chris Stapleton andKane Brown. The ceremony also honoredMickey Guyton as the Breakout Artist of the Year andRandy Travis as the Artist of a Lifetime, so Kelsea was definitely in great company. 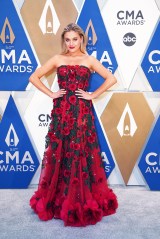 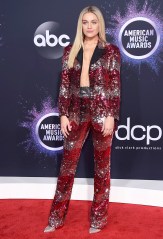 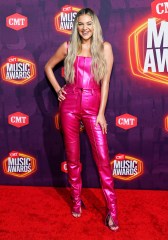 Kelsea released her third studio album,Kelsea, during the week that the world shut down amidst the coronavirus pandemic in March 2020. She followed it up with the recordBallerini, which featured stripped down versions of the same songs from Kelsea, in Sept. 2020. Once things started fully opening up again in 2021, she joined the Jonas Brothers tour, which kicked off at the end of summer 2021 and continued into the fall.

Earlier this year, Kelsea took home the CMT Music Video Award for Performance of the Year. She was honored for her performance of “The Other Girl” withHalsey at the 2020 CMT Music Awards. She was also nominated for Female Artist of the Year at the 2021 ACM Awards in April, but lost toMaren Morris.