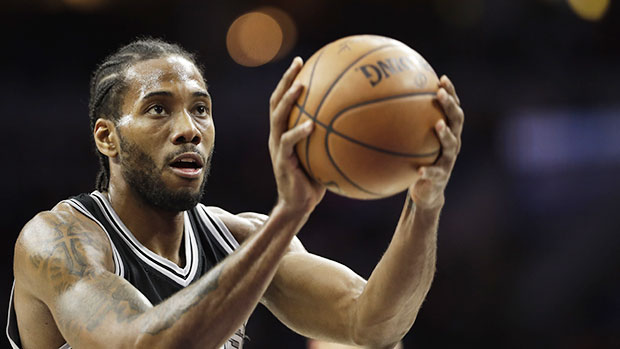 Bio:Kawhi Leonard (born Kawhi Anthony Leonard on June 29, 1991 in Los Angeles, California) is an American professional basketball player. After attending Martin Luther King High School, he enrolled in San Diego State, averaging 12.7 points and 9.9 rebounds per game as a freshman. As a sophomore, he helped take the team to the NCAA Sweet 16, where they lost to the UConn Huskies. He declared himself eligible for the 2011 NBA Draft, where he was picked by the Indiana Pacers, but then traded to the San Antonio Spurs. He had a successful rookie career, but he would break out during the 2013-14 season. During the 2014 NBA Finals, he averaged 17.8 points per game, earning him the NBA Finals MVP. The Spurs defeated the Miami Heat to give Kawhi his first NBA Championship. He was selected for the NBA All-Star game in 2015-16, and made his second appearance in the 2017 NBA All-Star Game.

Personal Life:Kawhi’s cousin is Stevie Johnson, a wide receiver for the NFL’s Los Angeles Chargers. In 2008, Kawhi’s father, Mark, was shot and killed at the Compton caw wash he owned and operated. By 2014, the murderer had not been found and the family stopped asking the authorities for updates. In 2016, Kawhi and his girlfriend, Kishele Shipley, gave birth to their first child.