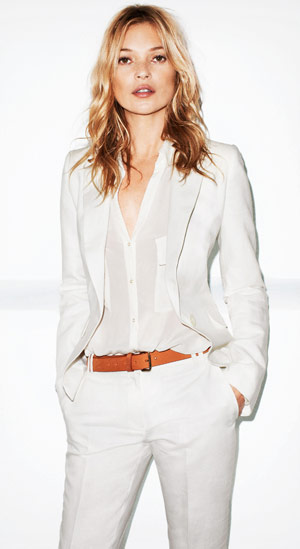 Bio:Kate Moss (born in London, England on January 16, 1974) is one of the world’s most famous supermodels and fashion icons of all time! She is known for gracing the front covers of fashion magazines, snagging campaigns with the most elite designers, and for popularizing the “heroin chic” looks of the 1990’s. Kate began her modeling career at age 14, and quickly became an instant sensation. Her ultra thin figure and willingness to pose nude has always been a topic of controversy, especially in the 90’s when she became the opposite of curvaceous and tall models at that time. Kate has become a style icon of the 21st century by popularizing the “boho chic” style. She has launched her own fragrances and body lotion, and has designed exclusive collections for retail chain Topshop, and handbags for Longchamp. Kate has led a controversial lifestyle through her highly publicized relationships, a party lifestyle, and drug use. In 2005, Kate was caught in a cocaine scandal with then boyfriend Pete Doherty that caused her to loose multiple high fashion contracts. After ending her relationship with Pete and entering a rehabilitation program, Kate made a huge comeback by landing 18 top modeling contracts in 2006. Since the scandal, she has made more money then ever before, and has won countless modeling awards.

Best Known For:Kate is best known for being a high fashion model and style icon with a bad girl edge. She has brought on much debate on weight and waste size in the modeling world through her tiny waifish frame. She has worked exclusively with all of the top fashion brands and has changed the way models look.

Personal Life:Kate is a mom to daughter Lila Grace Moss Hack whom she shares with editor Jefferson Hack. She was involved in a controversial relationship for over two years with Pete Doherty with whom she became engaged to in 2007. After breaking off this engagement, Kate met guitarist for The Kills, Jamie Hince, and was engaged to him by March 2008. The two were married in 2011, where she wore a dress by designer John Galliano.

Michael Douglas’ Kids: Everything To Know About His 3 Children

Kate Walsh Teases A Return To ‘Grey’s Anatomy’ 14 Years After Leaving: The Show ‘Changed My Life’