In light of Justin Bieber getting a new face tattoo, we thought now would be the perfect time to put a spotlight on every piece of ink the singer has ever gotten! See all the pics, here.

Justin Bieber, 24, has dozens of tattoos covering his incredible body. He has so many, in fact, that in June 2016, there was a complete guide to 56 of them. FIFTY SIX. And clearly, he’s gotten a lot more since then. Now, his entire chest is covered in ink, and most recently, he got a matching tattoo with Hailey Baldwin above his eyebrow! So we felt there would be no better time than now to give you an updated guide on all of Mr. Bieber’s tattoos. Because let’s be real — it’s hard to keep up.

“It seems like I have a lot of stuff,”Justinonce said in aGQinterviewwhen discussing his tattoos. He also called the whole process “mad uncomfortable.” It’s no secret that Justin loves showing off his tattoos. From shirtless selfies to pics of the singer wearing nothing but a towel, he’s done it all. And while some may shame him for doing so, we think he deserves a little positive attention for all the discomfort he went through while getting the tattoos. Especially when you consider the fact that he’s been getting them since he was 16!

Since he was 16, Justin has gotten various religious tattoos, including David Beckham-style wings on his neck, an anchor below his right ear, a big cross across his chest, a crown on his right collarbone, the word “purpose” above his belly button (a clear tribute to his album, Purpose), a seagull on his left hip and more! He even had a tribute to ex-girlfriend Selena Gomez on his wrist (her as an angel), but in 2018, he covered it up after reuniting with Hailey. He also got a tattoo on his upper leg that reads “BETTER AT 70” to remind him “to work everyday to be better at 70.” 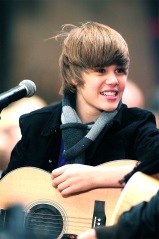 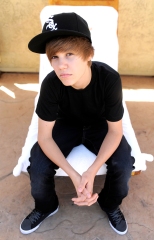 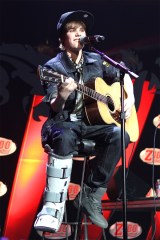 In 2019, Justin continued his tattoo trend when he mirrored Hailey’s “lover” neck tattoo with one of his own that read “forever” underneath a sparrow. He explained what the significance of the bird is in an interview with Vogue in 2021. “It’s a reminder to use the gifts God has given me and give it all I have—to fly above all of the bullsh*t,” he said. He went on to also add a laurel wreath around his neck and a rose rising from his collarbone to his neck in 2020.

And believe it or not, Justin has a lot more than those we listed. Want to see them all? Click through our photo gallery above!