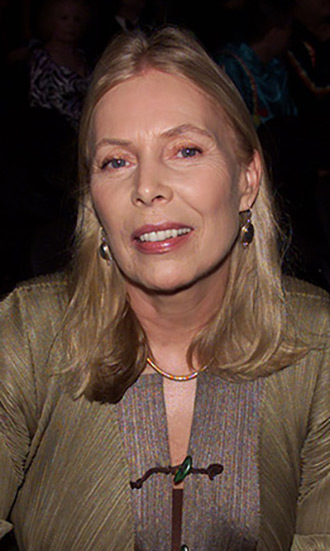 Bio:Joni Mitchell (born Roberta Joan Anderson on November 7, 1943 in Fort Macleoud, Alberta, Canada) is a Canadian singer-songwriter. Joni started singing with her friends at bonfires in the early 1960s. Eventually, she got a few coffeehouse gigs in Saskatoon before her first paid performance at age 18. In 1964, Joni moved to Toronto to become a folk singer. After meeting Chuck Mitchell in 1965, he encouraged her to move to the States. Joni moved to New York City and became part of the burgeoning Folk scene of the 60’s and 70’s. Joni released her debut album, Song To A Seagull, in 1968. Her second album, Clouds, would win her her first Grammy for Best Folk Performance. And her third album, Ladies of the Canyon, would contain one of her best known songs, “Big Yellow Taxi.” During the early 70’s, Joni would see her biggest commercial and mainstream success with albums Blue and Court and Spark. In the late 70’s and 80’s, Joni worked closely with jazz and electronic musicians, including Jaco Pastorious and Charles Mingus. Already political in her music, Joni engaged in multiple political protests during this time. Joni would continue to make music up until 2002, before she announced her retirement from active recording and touring. Her most recent release was 2007’s Shine, the first collection of new music in over a decade.

Personal Life:In 1965, Joni gave birth to a daughter from ex-boyfriend Brad MacMath. She gave the girl, Kelly Dale Anderson, up for adoption. Keeping the experience private, Joni met her daughter for the first time in 1997. Joni first married folk singer Chuck Mitchell in 1965, but divorced him in 1967. She then married bassist Larry Klein in 1982. The two divorced in 1994. In addition to music, Joni is an avid painter.

Cardi B Dresses Kulture, 1, As Moana For Halloween & Fans Are Obsessed — Watch Video