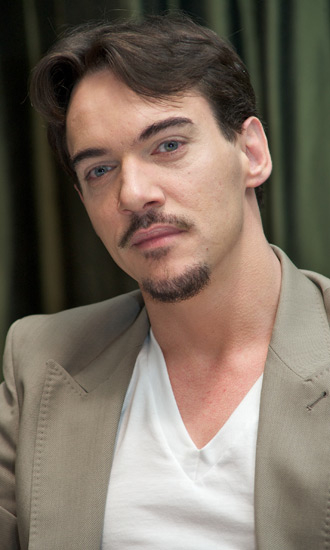 Bio:Jonathan Rhys Meyers (born Jonathan Michael Francis O’Keeffe in Drimnagh, Ireland on July 27, 1977) is an Irish actor best known for his roles in the films Velvet Goldmine, Mission Impossible III, Bend It Like Beckham and Match Point, as well as his television roles as Elvis Presley in the biographical miniseries Elvis, and as King Henry VIII in The Tudors.

Best Known For:Jonathan Rhys Meyers is best known for his television roles as Elvis Presley in the biographical miniseries Elvis, which earned him a Golden Globe for Best Actor, and as King Henry VIII in The Tudors.

Personal Life:Jonathan Rhys Meyers was in a relationship with Reena Hammer from 2004 to 2012. He did three stints in rehab for alcoholism, one in 2005, one in 2007 and one in 2009.  In May 2010, Jonathan was banned from flying United Airlines for life after he had an alcohol-related outburst on the plane. Jonathan is currently engaged to Mara Lane.