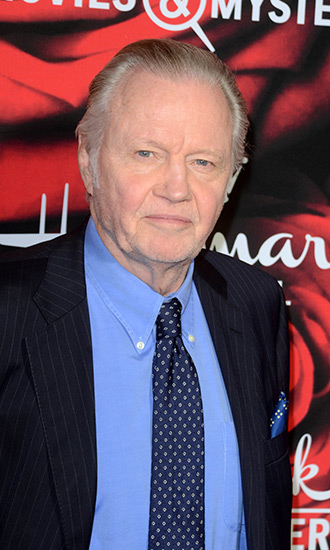 Bio:Jon Voight (born December 29, 1938 in Yonkers, NY) is an American actor. He is an Academy Award winner and has won four Golden Globes. He came into prominence in the late ’60s with his performance in Midnight Cowboy. During the 70s, he became a star, with roles in Deliverance, Coming Home and The Champ. Jon was also in Ali, for which he was nominated for an Academy Award, and Pearl Harbor, in which he played Franklin D. Roosevelt. Most recently, he has appeared on the Showtime show Ray Donovan and received a Golden Globe for Best Supporting Actor for the role in 2013.

Personal Life:Jon was a liberal in his early life and has been outspoken regarding how President Kennedy’s assassination traumatized him. Recently, Jon has adopted conservative views and spoke at Donald Trump’s inauguration. Jon is the father of Angelina Jolie and James Haven, whom he had with actress Marcheline Bertrand.