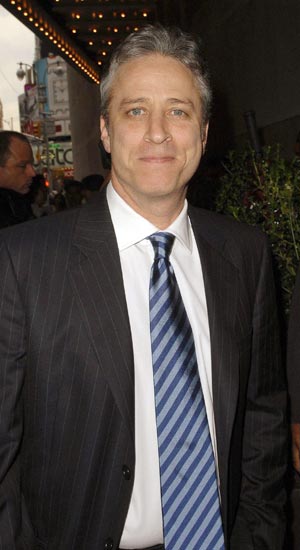 Bio:Jon Stewart (born Jonathan Stuart Leibowitz in New York City, New York, on November 28, 1962) is an American journalist, TV host, wrier, producer, author, political satirist and comedian. Jon broke out in the 90s, when he had is own TV show on MTV, The Jon Stewart Show. He also had memorable appearances in movies like Half Baked, Big Daddy and Jay and Silent Bob Strike Back. In 1999, Jon replaced Craig Kilborn as the host of Comedy Central’s The Daily Show. The funny-man has made numerous appearances on CNN, Fox, MSNBC, as a political and media expert. To date, Jon has won 16 Emmy Awards; he also hosted the 78th and 80th Academy Awards. On Feb. 10, 2015, Jon confirmed that after 16 years, he was leaving The Daily Show. His last episode as host of the satirical news program was on Aug. 6, 2015, which saw a reunion of all the correspondents he worked with over the past 16 years — including Stephen Colbert and Steve Carrell.

Best Known For:Jon Stewart is best known as the former host of The Daily Show.

Personal Life:Jon married his girlfriend of four years,Tracey McShane, in 2000. Together, they have two children: Nathan and Maggie. Jon proposed to Tracey through a crossword puzzle with the help of the crossword editor at the New York Times, Will Shortz.