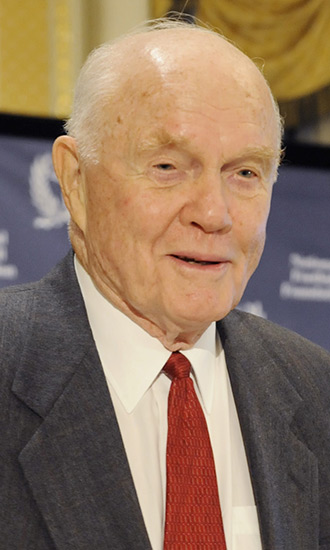 Bio:John Glenn (born July 18, 1921 in Cambridge, Ohio) was a former aviator, engineer, astronaut and US State senator. John was part of the “Mercury Seven” group of military pilots selection to become America’s first astronauts to fly the Project Mercury spacecraft in 1959. In 1962, John became the first American to orbit the earth and the fifth person in space, as he flew the Friendship 7 mission. He was the last surviving member of Mercury Seven. John resigned from NASA in 1964, then announced his plan to run for the US Senate, however a concussion from a fall caused him to withdraw from the race. He finally won the election to the Senate in 1974 and served through 1999. John was awarded the Presidential Medal of Freedom in 2012 by Barack Obama. On September 1, 2016, there was a new rocket named after John called, The New Glenn. John died at the age of 95 on December 8, 2016.

Best Known For:John Glenn was best known as the first American to orbit the earth.

Personal Life:John Glenn married his high school sweetheart, Anna Margaret Castor, in 1943. They both attended Muskingum College in Ohio. John was part of the Democratic Party. On June 28, 2016, the Columbus, Ohio airport was renamed the John Glenn Columbus International Airport. He had a stroke after open heart surgery and a stroke in 2014, according to NBC. On December 7, 2016 he was hospitalized for unknown causes. John died on December 8, 2016.