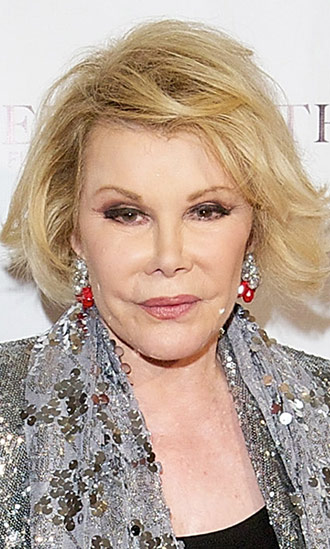 Bio:Joan Rivers (born Joan Alexandra Molinsky in Brooklyn, New York on June 8, 1933) is an American comedienne, actress and television host. She currently co-hosts E!’s celeb fashion show Fashion Police. She first rose to fame in 1965 when she was featured as a guest on The Tonight Show with Johnny Carson. She went on to host The Joan Rivers Show, which earned her a Daytime Emmy for Outstanding Talk Show Host. In addition to Fashion Police, Joan also hosts the web series, In Bed With Joan. She is known for teasing celebrities, but also jokes about her own plastic surgery.

Sadly, Joan passed away on Sept. 4, 2014 at Mt. Sanai Hospital in New York City, following serious complications — including cardiac arrest — during a procedure on her vocal cords at a clinic on the Upper East Side of Manhattan. She was 81 years old at the time of her death.

Best Known For:Joan is best known for her comedy skills as well as her opinions on red carpet fashion. She currently co-hosts the weekly series, Fashion Police.

Personal Life:Joan’s first marriage was to James Sanger in 1953. She married Edgar Rosenberg in 1965. Their daughter, Melissa, was born in 1968. Joan died on Sept. 4, 2014, following complications during a procedure on her vocal cords.