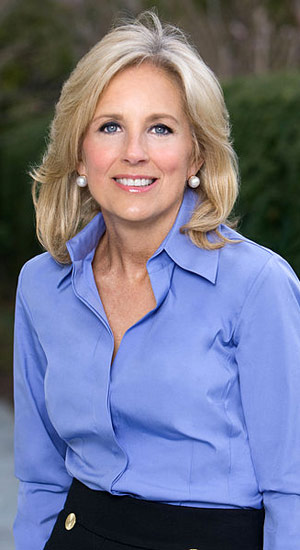 Bio:Jill Biden (born Jill Tracy Jacobs in Hammonton, New Jersey on June 5, 1951), is the wife of Vice President Joe Biden, and an educator. Jill started her career teaching English, reading and history and has a passion for education at the community college level. She is the president of the Biden Breast Health Initiative, a nonprofit organization to raise breast health awareness. Jill helped found Book Buddies, which provides books for low-income children, and she’s active in Delaware Boots On The Ground, an organization supporting military families. Jill became the Second Lady of The United States, when her husband was sworn in as the Vice President in 2009. She leads the initiative to raise awareness about community colleges for the Obama administration, and teamed up with Michelle Obama for the ‘Joining Forces’ initiative to raise awareness of military families. Jill continues to teach as an associate professor at Northern Virginia Community College.

Best Known For:Jill Biden is best know for being the Second Lady of the United States.

Personal Life:Jill’s first marriage to bar owner Bill Stevenson ended in a nasty divorce after six years. She met her husband Joe on a blind date while a senior at the University of Delaware. The couple married in 1977 at the United Nations’ Chapel. She immediately became a mother to Joe’s two sons, Beau and Hunter, who had survived a car crash that claimed his first wife and daughter. Jill gave birth to her own little girl, Ashley Blazer, in 1981.