Jennifer Lawrence stunned at the NYC premiere of ‘Red Sparrow’ in a black, cleavage-baring gown on Feb. 26. But, she suffered a slight nip slip in the sultry dress…

While Jennifer Lawrence, 27, is a red carpet stunner, even she can’t escape a wardrobe malfunction. The actress suffered a dreaded nip slip while promoting her latest film, Red Sparrow in New York City on February 26. Jen showed up to Lincoln Center in a gorgeous, plunging black dress with intricate, sheer detail. Luckily the striped components on her gown distracted the fashion mishap, and as a result, it was barely visible. Check out her full red carpet look below!

Jen’s been hitting countless red carpets on her Red Sparrow press tour, and there’s a theme to her spy film fashion — cleavage! The actress has been taking red carpet risks and it’s certainly paying off. While promoting the film in London last week, Jen looked radiant in a multi-color, nude-based Dior number with a plunging neckline. She opted for bouncy curls, as opposed to her straight hair and the hairstyle paired perfectly with her dress. Then, Jen hit the London premiere of her new film, where she turned heads in a cleavage-baring, black Versace number that showed off her incredible physique. Although she was slammed for wearing the revealing dress in such cold London weather, Jen didn’t let critics get the last word. 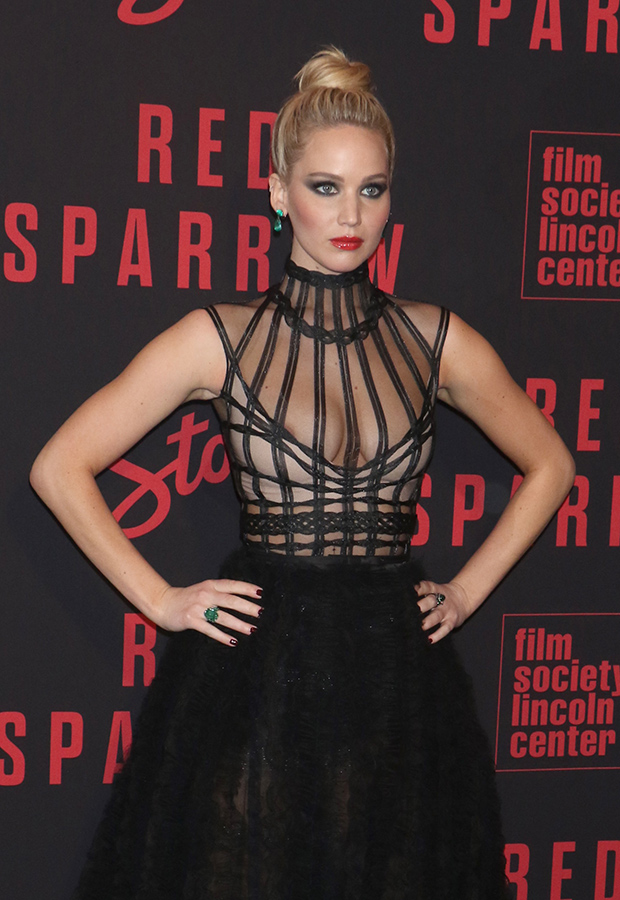 The actress took to Facebook with a long message, letting those who criticized her look are just over reacting. “Wow. I don’t really know where to get started on this ‘Jennifer Lawrence wearing a revealing dress in the cold’ controversy. This is not only utterly ridiculous, I am extremely offended,” she wrote. “That Versace dress was fabulous, you think I’m going to cover that gorgeous dress up with a coat and a scarf? I was outside for 5 minutes. I would have stood in the snow for that dress because I love fashion and that was my choice.This is sexist, this is ridiculous, this is not feminism. Over- reacting about everything someone says or does, creating controversy over silly innocuous things such as what I choose to wear or not wear, is not moving us forward. It’s creating silly distractions from real issues. Get a grip people. Everything you see me wear is my choice. And if I want to be cold THATS MY CHOICE TOO!”

HollywoodLifers, which Red Sparrow premiere gown of Jen’s is your favorite?

How Christina El Moussa Got Her Amazing, Flat Abs After 2 Kids – Her Fav Workout