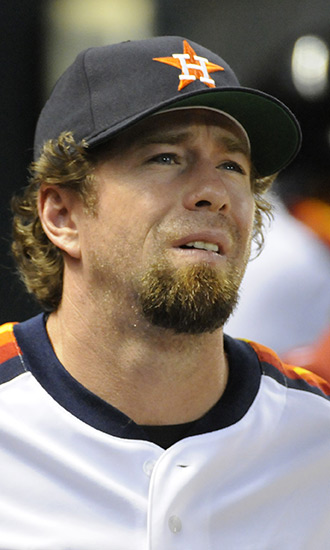 Bio:Jeff Bagwell (born Jeffrey Robert Bagwell May 27, 1968 in Boston, MA) is known for being a Major League Baseball star. After playing NCAA baseball as a third baseman at the University of Hartford, he was drafted in the fourth round of the 1989 draft by the Boston Red Sox. He was traded to the Houston Astros the following year and would spend his entire 15 year career with the team. In 1991 the first baseman was named the National League Rookie of the Year and in 1994 became the fourth unanimous National League MVP in history. He set a team record 449 home runs that still stands today. He’s the only MLB player to notch up six consecutive seasons of 30 home runs, 100 RBI’s, 100 runs scored, and 100 walks, coming between 1996-2001. On Jan. 18, 2017, Jeff was voted into the MLB Hall of Fame on his seventh ballot with 86 percent of the Baseball Writers of America’s vote.

Best Known For:Jeff is best known for being a Major League Baseball star with 15 years playing for the Houston Astros.

Personal Life:Jeff is the only son of Janice and Robert Bagwell and comes from a large family of Boston Red Sox fans. Jeff has been married three times, first to model Shaune Stauffer in 1992 then to Ericka Bagwell. She and Jeff have two daughters, Bryce and Blake. He’s now married to his third wife Rachel Bagwell. After retiring, Jeff continued to work for the Astros, filling in positions such as hitting coach.