Although her boyfriend is nominated for 2 Oscars, it was Irina Shayk who stole the show on the red carpet at the 91st annual awards show on February 24! See her full look, which featured a sultry black dress and a poker-straight bob haircut!

Irina Shayk, 33, never disappoints on the red carpet! And, she stole the attention away from her Oscar-nominated boyfriend Bradley Cooper, 44, at the 91st annual Academy Awards in Los Angeles on February 24. The supermodel showed off her incredible figure in a curve-hugging black, long sleeve dress. The tight ensemble featured a gold, fringed belt with matching sleeves, which made the dress a stand-out on the red carpet.

Shayk’s outfit wasn’t the only thing that made heads turn at the Dolby Theater. It was her straight, brown bob and fresh face that really caught the attention of onlookers at the event.Meanwhile, Cooper looked dapper in a black and white tux with a bowtie. His tux was visibly tailored to perfection, as seen when he walked his lady love down the carpet. Nonetheless, the actor opted to do interviews solo. See the couple all smiles on the red carpet, below!

Shayk is on hand at the Oscars to support her man, who is nominated for multiple awards tonight. Cooper’s film, A Star Is Born, which he directed and starred in, is up for two Oscars including: Best Picture and Best Adapted Screenplay. He is nominated for Best Actor for his role as Jackson Maine in the film. 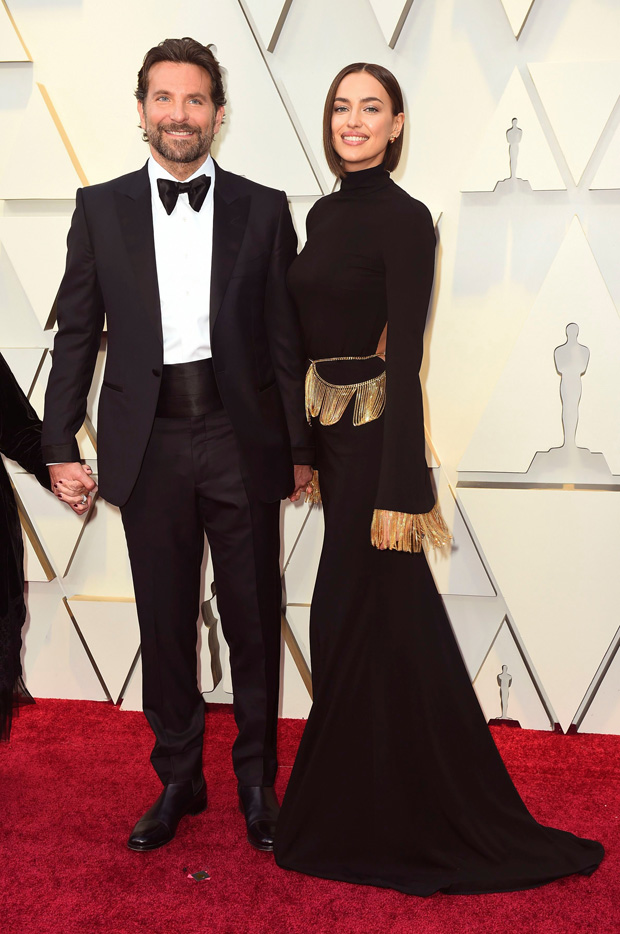 Bradley Cooper & Irina Shayk pose together on the red carpet at the 91st annual Academy Awards at the Dolby Theater in Los Angeles on February 24, 2019. (Photo credit:Shutterstock)

Many were surprised that the model attended the Oscars with Cooper, who she shares a 1-year-old daughter, Lea De Seine, with — not because she doesn’t support her man, but Shayk tends to lay low in Hollywood. She recently spoke out about her decision to keep certain aspects of her life private.

“Because my work requires me to be out there, I just decided my personal life will be quiet,” Shayk told Glamour UK in a cover story published on February 7. “That’s why it’s called personal, because it’s something for you and your family, and I feel happy with it.”

The model went on to explain that although she doesn’t agree with her friends who tend to post personal things on social media, she finds no issue with it — it’s just not her style. “I have a lot of friends who share a lot of their personal life on Instagram or social media, very publicly,” she explained. “I admire it and I think it’s great — but I think it’s all about personal choice.”

Earlier this month, Shayk and Cooper skipped out on attending the Grammys, and instead hit the 72nd British Academy Film Awards where he was nominated for seven awards. While Cooper and Shayk both walked the red carpet, they did not pose for photos together at the event.

Fleetwood Mac’s Lindsey Buckingham, 71, Says Ex Stevie Nicks, 73, May Not Be ‘Over’ Him