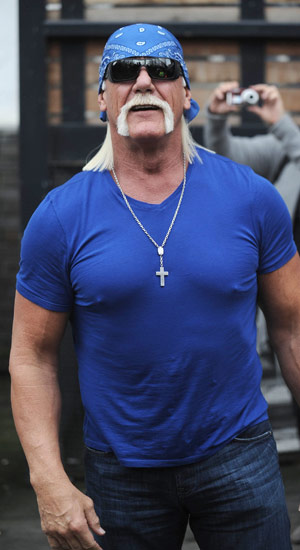 Bio:Hulk Hogan (born Terry Gene Bollea on August 11, 1953 in Augusta, Georgia) is an American professional wrestler, actor, and television personality. He is a 12-time world champion wrestler. During his popularity in the 80s and 90s, Hulk starred in several movies, including Suburban Commando (1991), Mr. Nanny (1993), Santa with Muscles (1996), and 3 Ninjas: High Noon at Mega Mountain (1998). He also starred in his own television series, Thunder in Paradise, in 1994. In 2005, Hulk, his then-wife, Linda Hogan, son Nick, and daughter Brooke starred in their own reality show, Hogan Knows Best, which ran from 2005-2007. Hulk and Linda divorced in 2008. A spinoff, Brooke Knows Best, followed from 2008-2009. Hulk experienced a sex tape scandal in 2012, when footage was released on the internet, showcasing him having sex with Heather Clem, the ex-wife of Hulk’s DJ friend, Bubba the Love Sponge. He sued Gawker Media, its founder Nick Denton and ex-editor A.J. Daulerio for $100 million for publishing a 1:41 snippet of the tape on gawker.com. On March 18, 2016 a Florida jury awarded him $115 in compensatory damages.

Best Known For:He is best known as the all-American character Hulk Hogan in the World Wrestling Federation (WWE). He also starred on the Vh1 reality series, Hogan Knows Best, from 2005-2007.

Personal Life:Hulk was married to Linda Claridge from 1983-2007. They have two children together: Brooke and Nick Hogan. Following his divorce from Linda, Hulk has been in a relationship with Jennifer McDaniel since early 2008. They married on December 14, 2010.